Running the Tensorflow container in WSL2

Now that we have readied the WSL2 environment with Singularity and the relevant CUDA libraries, it’s time to run the sample Keras workflow.

Let’s run the GPU enabled version of TensorFlow from SCS Library, using the “singularity run” command. We’ll also use command line options –nv and –nvcli to check that tensorflow can see our GPU. This can take a minute or two on a slower internet connection as the container image is very large.

From the Python we’ll run two commands, first import the tensorflow package, then perform a device query to see the physical_device:GPU:0
You can safely ignore the warnings about NUMA support. This is a side effect of the WSL2 session, and won’t harm our ability to use Tensorflow. Now we’ll create and train a model, based on the TensorFlow beginner quickstart, and load some data creating the Keras model:

The “model=” line should output information about the GPU, and on the test system it shows a NVIDIA GeForce GTX 950:

The next steps are to continue preparing the model

And now run the training task

We can see above that the training is successfully using our GPU via the cuda_blas library. If you want to continue with more steps, please see TensorFlow beginner quickstart.

Singularity containers for CUDA applications can now be developed, tested, and used on a Windows laptop or desktop, and using the Remote Build, Library and Keystore functions of Singularity Container Services.. All of the standard Singularity features work well under WSL2, so it’s a really powerful development environment. When you need to run on more powerful GPU nodes, just take your SIF file to your HPC environment.

In future versions of SingularityCE and SingularityPRO we’ll be aiming to make the –nvccli method of GPU setup the default, simplifying this process further.If you have any questions, comments, or hit any trouble. Reach out via the Singularity community spaces.

We’ve had some questions about this video series and have decided to add a few more features of Singularity and Singularity Container Services.

Encryption is a well-known technology used to protect sensitive information, it can also be used to encrypt the contents of a container across a variety of use cases.

The Singularity client can locally build an encrypted container from a definition file, using passphrase. This feature allows the rootfs within a container to be encrypted at rest, in transit, and even while running. As a result, data is decrypted in kernel space, and there will not be any intermediate, decrypted rootfs lying around after the container is terminated.

This encryption can be performed using either a passphrase or asymmetrically via an RSA key pair in Privacy Enhanced Mail (PEM/PKCS1) format. The container is then encrypted while in transit, at rest, and even while running. In other words, there is no intermediate, decrypted version of the container on disk. Container decryption occurs at runtime completely within kernel space.

Passphrase encryption is less secure than encrypting containers using an RSA key pair. This feature is provided as a convenience, and as a way for users to familiarize themselves with the encrypted container workflow, but users running encrypted containers in production are encouraged to use asymmetric keys.

The container we are going to build from a definition file uses “curl” to call out to a console oriented weather service. Within the Ubuntu WSL2 environment, you can use the nano editor to copy this text and save to a file called “wttr.def”, which is calling to Singularity Container Services Library for a source Debian container, then adding “%post” and “%runscript” commands. For more information on how to use definition files and choosing different bootstrap sources, here is the documentation.

As with our previous demonstration of signing a container, an encrypted container must be locally created since Singularity Container Services does not store your private keys. What’s nice about the WSL2 environment is that users have sudo privileges and can build containers using the sudo command.

Launch the nano editor and paste the contents into the definition file:

With the definition file created, let’s create the encrypted container called “wttr-e.sif”, using the simplified passphrase method (not intended for production purposes.) For more information on Singularity’s encryption, here is a link to the documentation.

Now that we have built an encrypted container, let’s look at the contents using the Singularity client. We can see that the ID 4 is encrypted. For more information about this detail, please see the Singularity encryption documentation.

We can also see that the container image includes the definition file used during the build process.

And if we now look back at the container contents again, we can see the definition section is now deleted.

With the container encrypted as well as the definition file removed, we will now sign this container before pushing into our SCS Library.

With an encrypted and signed container, lets again look at the detail of the container with the Singularity client, and notice ID 1 with information about the SHA-256 signature.

We’d like to show what a “pull” and “run” operation of an encrypted container will look like to another Singularity installation. If you want to replicate this configuration, go into the Microsoft Marketplace and download the Debian App for WSL2. We set the screen background to blue for a differentiated view from Ubuntu. For Debian, we installed Singularity from sources, which are not covered here. However, you can follow the instructions to install Singularity on Debian from source code. This will ensure all the dependencies are installed. 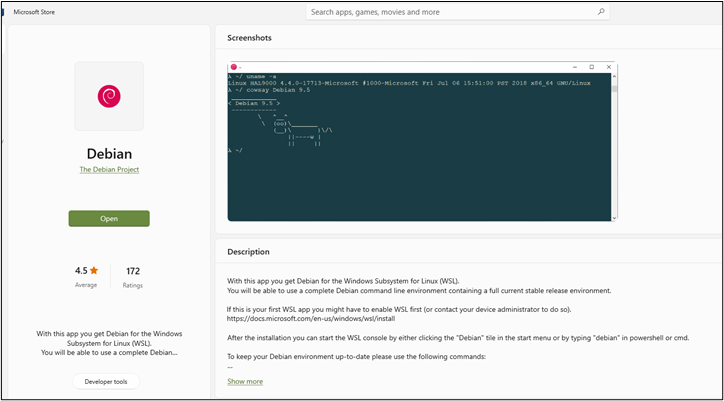 If we run the “singularity remote status” command, we will see that this environment is “logged out”, and not using any authentication tokens.

Ok, we should be ready Pull the encrypted/signed image from the Library.

As the new local user, a quick “sif list” of the “wttr_esign.sif” container will show that it is encrypted (ID 4) and signed (ID 1)

Success, the container has been verified. Upon running this command, the Singularity client has reached out to the SCS Key Service, and retrieved the appropriate public key material.

While we have the container, attempting to run it displays an error because this user in this environment does not have a passphrase to decrypt the image.

Now, trying that again with the passphrase, the image can be decrypted, and runs as expected. The “sf” part passes a location into the curl command. 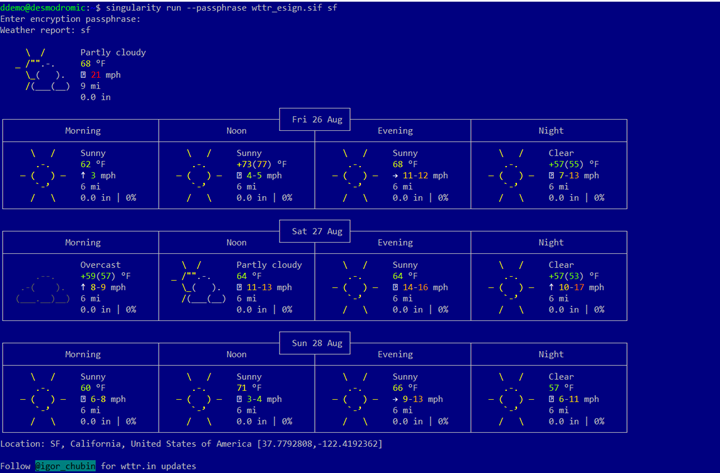 Browsing the Library on the Web

The largest collection of SIF containers made available for the community, by the community, can be browsed by using the SCS Library search function. Consider this a SIF registry, and if you need a base SIF container, or perhaps are working with a fellow researcher that has published some work and has included a container to verify their efforts, we can search for them from the Search function in the web interface. 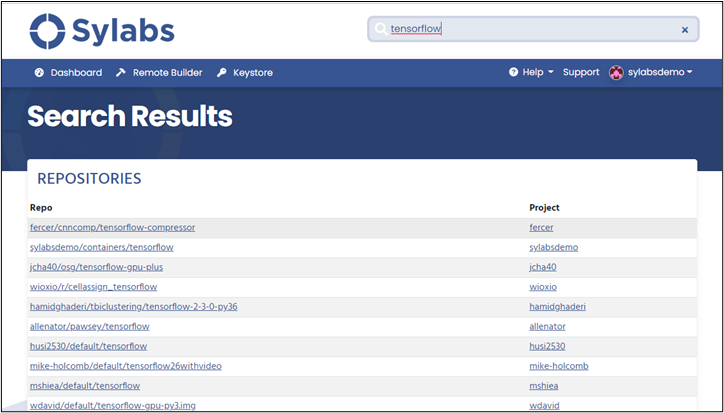 Next we will do a quick search for who else might be interested in sharing their Alpine containers, which of course you can always select from the Sylabs base images. We created an Alpine container called MyAlpine earlier in our demonstration series and can see the example “pull command” to retrieve this container. 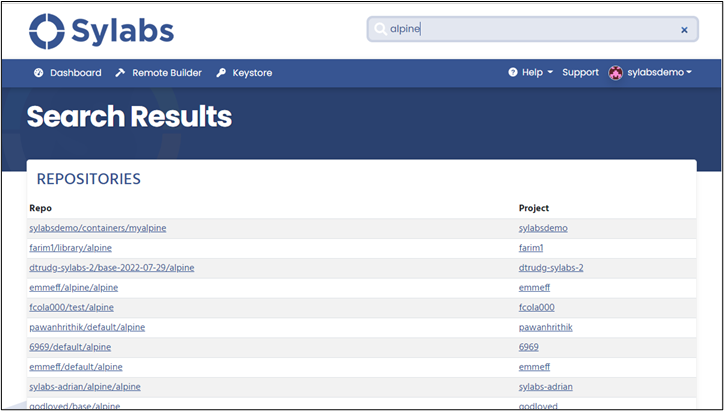 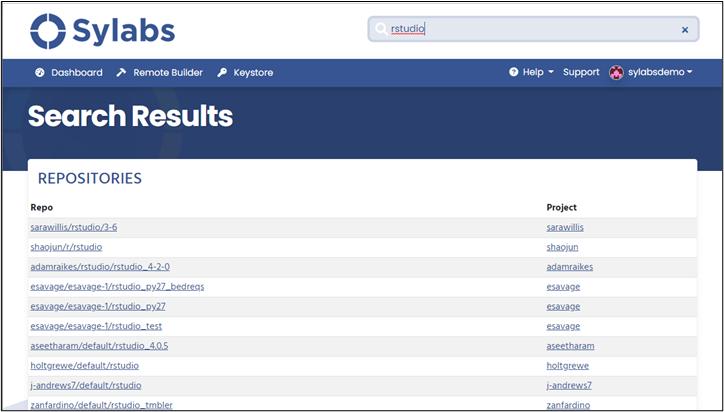 And finally, we can look for a WTTR containerized weather forecasting container, like the one we created, encrypted and signed 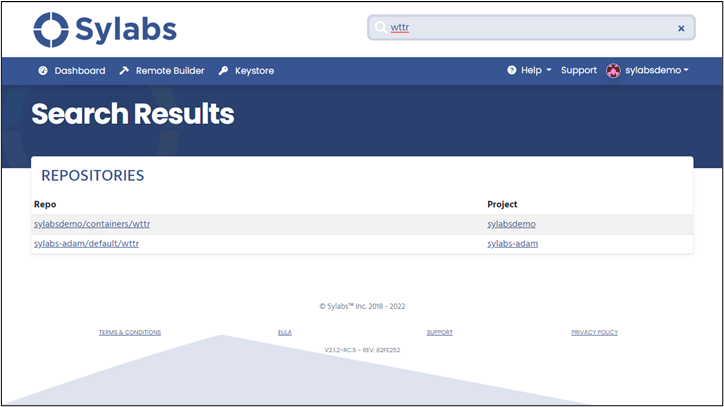 Because this container was encrypted, and signed, we can see the “lock” icon next to the container name and tag, along with the “signed” icon, with additional metadata below them. 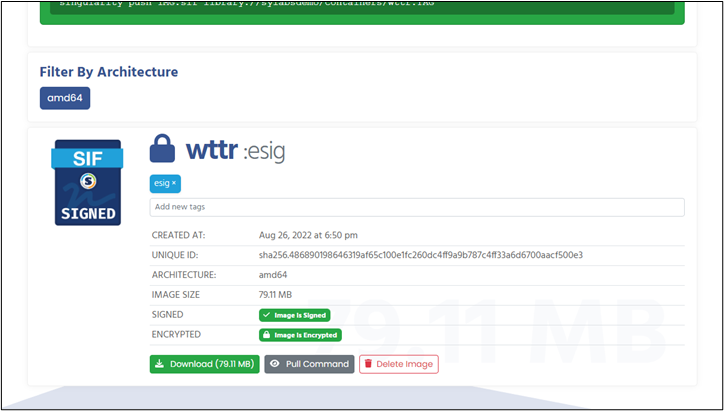 We can also see the example pull command that the Singularity client can use for this container too. 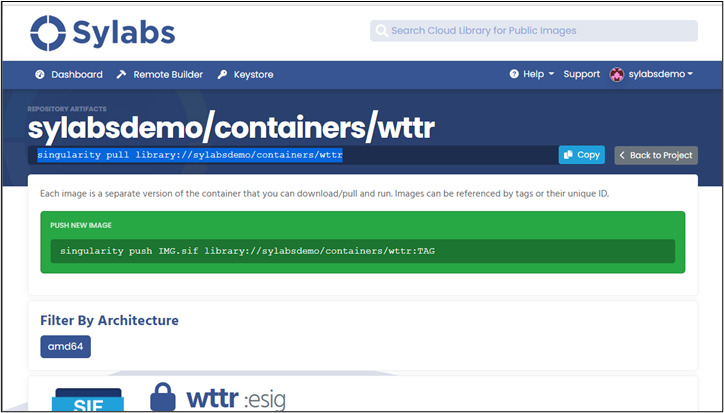 We hope you’ve enjoyed this five part series demonstrating Sylabs’ Container Services platform. Included were a containerized workflow in WSL2 with Tensorflow and Keras, and some advanced functions in SingularityCE, with signed and encrypted containers stored in SCS Library, and the simplified search function.

Follow us on at @Sylabs and @Singularity_CE or sign up for our newsletter to stay updated on the latest news and videos. Please feel free to try out the services, and let us know about your experience, and what features you’d like to see at https://sylabs.staging.sycloud.io/contact-us/.